Quite few things have happened in recent weeks and we would like to put ourselves in the current situation of what is coming this week, subjective estimation of the American harvest, report of American shipments for the month of April...

Starting with the American almond, the last shipments for the month of March, published on April 12, showed quite positive figures.

With these figures, a market that was at that time with some bullish sensations, since a first estimate, let's say traditionally important, was expected, that of Terra Nova, which was around 2.5 Blbs like other estimates that were coming to light up to that moment , was expected to strengthen the market, but it did not.

This estimate, quite traditional in the market, is actually one more of the many estimates that different private companies publish, but as we say, of great tradition and always very much taken into account in the market due to the way it is carried out, the time it has been and the degree of accuracy it has used to have, a few years more than others as is normal when talking about estimation. In the following graph you can see the deviations from the main estimates in the market in recent years:

This supposes a harvest similar to the current one, but with a surplus that has nothing to do with what is currently being worked on. If this year we have an entry of just over 2.90 Blbs with a surplus of 0.6 Blbs, we have a total of about 3.5 Blbs (a little less because something is always lost, around 2% of the entry of harvest). The year that he has with this same 2.90 Blbs of harvest input plus a surplus of 0.9/1 Blbs, we are talking about an available of 3.8/3.9 Blbs, the highest in history, since we have not never seen an available beyond the last 3.50 Blbs of the last two years.

As a result of this data, the market returned to its downward trend and to the lowest levels of the entire harvest, speaking of Std 5% at levels of 1.75 $/lb. It must be made very clear that there is a very clear difference between this product and the rest of the calibers, qualities and varieties. This difference is due to the fact that sales in the Middle East, India or China have been very active lately, which positions varieties such as Non Pareil quite different from the rest. The Std, a star product on the European continent, is what is most unmarked on the downside, also very important due to the position that the currency exchange has taken, which means that we are at very low levels in origin, but among the highest in €, also due to the increase in freight costs. This means that the European buyer, very well supplied as we have seen before, is calm in the purchase hoping that this situation will improve, while the American seller is focused on other markets.

Next, we have a graph where we see the evolution of the price of the Std in recent months: 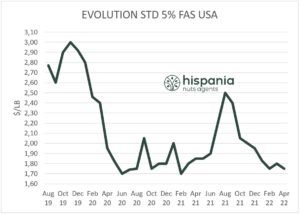 The official surface data was then published, giving a figure of 1,370,000 acres. With this area (slightly less than the one estimated by Terra Nova) and with the yield estimated by them, we would have a harvest of 2.88 Blbs, a little less than the commented estimate of Terra Nova. This data, being so similar, had little repercussion on the market.

We will see with the harvest estimate that the farmers are going to publish (subjective) how it stimulates the market and with it the shipments for the month of April. But we can see that making market predictions is very difficult, due to the amount of data that is on the table. Not only the estimates of the harvest and shipments, but also the issue of the Russia/Ukraine conflict and what this may have repercussions on the economy (currency exchanges, for example), the great logistical problem that exists, the availability of water and the cost of it to irrigate the fields of California from now on, inflation and new production costs, temperatures that are experienced especially in summer and with it the greater or lesser need for water (for now the low rainfall that have had throughout 2022 have been somewhat reinforced by the cool temperatures, especially during the month of April with some rain, something that is not usual).

Regarding the Spanish almond, the most important thing that we have had in recent weeks is, on the one hand, the frosts produced in a good part of the territory and, on the other, the high rainfall that has come at a time that has caused some damage, especially in those areas that they are not used to so many and that it has caught the tree in a phase that has seriously harmed it.

The frosts that occurred in a good part of the territory affected some areas more than others as usual, but this time their degree of affectation has been a little more generalized and its intensity has also been quite high. It should be noted from the point of view of the most affected areas, the area of Catalonia, Aragon, Castilla la Mancha and some area of the Valencian Community, Murcia and Eastern Andalusia. The most affected varieties, due to the dates when it occurred, have been later varieties such as Guara, Lauranne, Soleta and Ferragne, as well as in some areas the largueta. Of course this depends on the areas and there may be many opinions about it, but we are indicating the most representative and always in a generalized way. The rest of Spain, with special emphasis on Andalusia, Extremadura and Portugal, an increasingly productive area, have not been affected by this problem.

Another problem that has been seen in some areas is the excess of water, especially in areas of traditional and organic farming, more bare due to the lack of use of external products. The Murcian area and Eastern Andalusia are the most representative areas for this effect. We have been able to observe fungal problems or directly excess water in the tree that has caused some trees to die.

The magnitude of these damages is impossible to assign, but the closest thing we can handle in this regard is the recent subjective estimate that has been published, which has shown a decrease in production compared to recent years due to these problems.

AEOFRUSE (Spanish Association of Dry Fruit and Carob Producer Organizations) with DESCALMENDRA (National Association of Almond Shellers) has made the first (subjective) estimate of the Spanish 2022/2023 harvest, placing it at 75,051 Tn (of this figure 11,105 Tn are organically grown). If the estimate for last May 2021 compared to this campaign was 109,234 tons, this represents a decrease of -31.29%.

It is important to add that this estimate has been taken without taking Portugal into account. If we talk about, in addition to this estimate, considering a surplus that could be approximately 20,000/25,000 tons and that Portugal could produce a potential of 25,000/30,000 tons, we would have a total available in the Iberian Peninsula of 120,000/130,000 tons. All these data are estimates and may vary significantly from reality.

As a result of all this, the market has reacted bullishly, raising the price by approximately €0.10/0.15/kg. The offer has been withdrawn quite a bit, especially that which comes from the previously mentioned affected areas, and has caused a market of very low activity, even more so with respect to how poor it was before all these events. The European buyer (the main destination for Spanish almonds outside its borders) is, as we have mentioned with American almonds, very much on the lookout. The national buyer is the one we have seen most active in recent weeks.

All the problems that we have mentioned regarding the American almond benefit other origins, such as the Spanish almond. It is clear that all this can benefit you from a commercial point of view, but this does nothing more than, due to the way you proceed, worsen the activity and further collapse it.

Currently the price ranges between €4.20/4.30/kg depending on deliveries, sizes and varieties. Some more specific ones, such as Largueta, have values around €6/kg and Marcona at €8.30/kg. The organic one, which has stopped its downward trend and has been placed in an equally inactive way, but not with that downward feeling that was being breathed, at around €8/kg. As for the new harvest, the buyer shows signs of interest at levels of €4.20/4.25/kg, with no interest on the part of the offer.

In the following graphs we can see the evolution of prices to date. 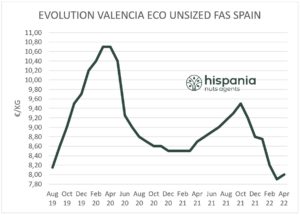 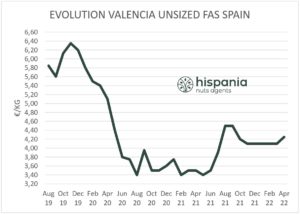 We hope our comments can be of help.

Thank you from the Hispania team.

We await with pleasure the opportunity to greet you