We have the publication of the last report about the American shipments of the last month of NOVEMBER 2022.

Regarding the destination of the shipments, countries such as India, France, Arab Emirates and Morocco (very strong increase) stand out positively. On the negative side, important countries such as Canada, China (very strong fall), Japan, South Korea, Germany (strong fall), Italy, Holland, United Kingdom, Saudi Arabia (strong fall) and Turkey. In Spain, the situation has been positive, with 13.61 Mlbs this month compared to 10.93 Mlbs the previous year (+24.52%). In total, 59.69 Mlbs of crop have been exported this year and 51.61 Mlbs last year (+15.66%). In Europe in general 42.14 Mlbs this month against 53.06 Mlbs last year (-20.58%). In total, the crop has been exported to Europe -2.21% less than last harvest.

With these data, which are really negative, there is no bullish factor to hold on to. Sales are not what was expected, and with it shipments, the entry of the crop, despite what is thought in California, for the moment it has not been seen that anything different from what was estimated is going to happen... On the other hand, the buyer is not very active. The long term buyer seems to be not so long term this year, the truth is that the reasons for this are very strong. On the one hand, the psychological factor that, if he had gone short this season, he would have been better off. On the other hand, the rarefied economic situation of the future does not make him confident and courageous. Then the market doesn't seem to be going against him, or so it seems... So it's the perfect cocktail.

On the other side a seller who is used to know where he is and with the certainty that at a certain market value the buyer would not be lacking. But now this is not the case and creates a lot of insecurity. It is normal for the seller to know that at a certain price level the buyer would jump in easily and now the image is given that he does not know what this level is. Prices are already at very low levels and the buyer is still not very active. In other words, the seller has the feeling of not being able to control the situation and not knowing how to recover it. All this, together with the negative atmosphere for the farmer and the low profitability of these price levels, will make many farmers think about whether this crop is profitable.

We will see for the future when we enter the speculative stage of the year for the next harvest, we will see the rains, frost, bees... but judging by the good rainfall in California for now it does not seem that things are going badly.

After shipments and throughout the following days, we have been able to observe prices dropping a little, being already at levels of around 1.51 $/lb for Std 5%. On the other hand, the currency exchange rate also seems to play its role, making it cheaper in euros than weeks ago, with a current exchange rate at 1.06 and according to the latest news with more bullish than bearish trend. Below, we offer a table with updated prices. 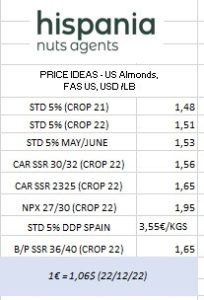 After the Christmas holidays, since the market is not going to move much during them, we will see which way the market goes.

Below is a graph showing the evolution of prices: 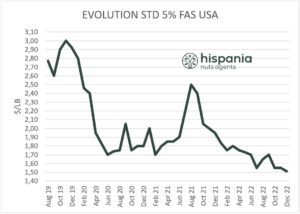 As far as Spanish almonds are concerned, we can say that there has been no apparent change, not only in the last few weeks, but we can extend this to the whole of the season so far. We continue to have a surprisingly comfortable apathy on the part of both buyers and sellers. The sellers are waiting for a better price that has so far failed to materialise and the buyers, apparently supplied mainly in the medium/short term, perhaps going for the cheaper American option, but not to any great extent either. Let's be honest, the price difference between Spanish and American almonds makes Spanish almonds very, very dangerous.

Prices remain the same, owners around 4.25/4.35 €/kg depending on sizes and varieties. Average sizes (12/14) at similar levels, if not lower. We have already been able to see operations on the market for example of Lauranne 12/14 at lower levels than this same variety in good sized owner. On the part of the large sizes (s/14), it does seem that it has taken somewhat higher levels, given the lack of supply of the same and how short the harvest seems to be coming in this sense, which makes demand more apparent in this product. Prices have already been around 4.65 €/kg for this size in communa and 4.70/4.75 €/kg in monovarietals, and even slightly higher in Lauranne and Guara.

In the last few weeks, there has been a little more interest from sellers, but in a very subtle way and without any pressure on the market, which is why it has remained still. The buying side is increasingly unwilling to buy.

The higher priced products, such as Belona, Constantí, Ecological... are on a downward path due to the general market situation. In the workhorse varieties it is already difficult, given the wide differential with American almonds, and if we move on to more expensive products, it becomes even more difficult. This makes it clear that these products do not have a wide enough specific market to pay the intended value. We don't want to include Marconas and Larguetas in the equation, despite the fact that almost nothing is being traded in these varieties, because the harvest is so short for these varieties that supply and demand is almost non-existent in equal measure.

A rare occurrence this season has been a stable price from start to finish, with no change whatsoever along the way. But let's be honest, this has been achieved not because of activity, but because of the lack of supply in some sections and above all the seller's determination to maintain the price at the cost of doing fewer transactions.

The key here is to know if a lower or higher percentage has been sold than the lower harvest we have this year, in order to know if there is more or less than last year despite having less harvest.

Below is a graph showing the evolution of prices: 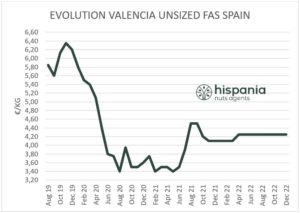 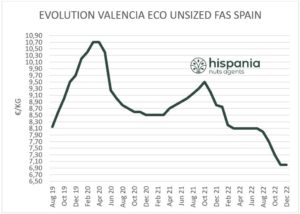 As with the American almond, we will see which way things go after the festive season. For now, we have had some good rains, but more is still needed. We are now entering the speculative season, which may produce a turnaround in this rather apathetic market.

We hope this helps.

Thank you very much.

We await with pleasure the opportunity to greet you